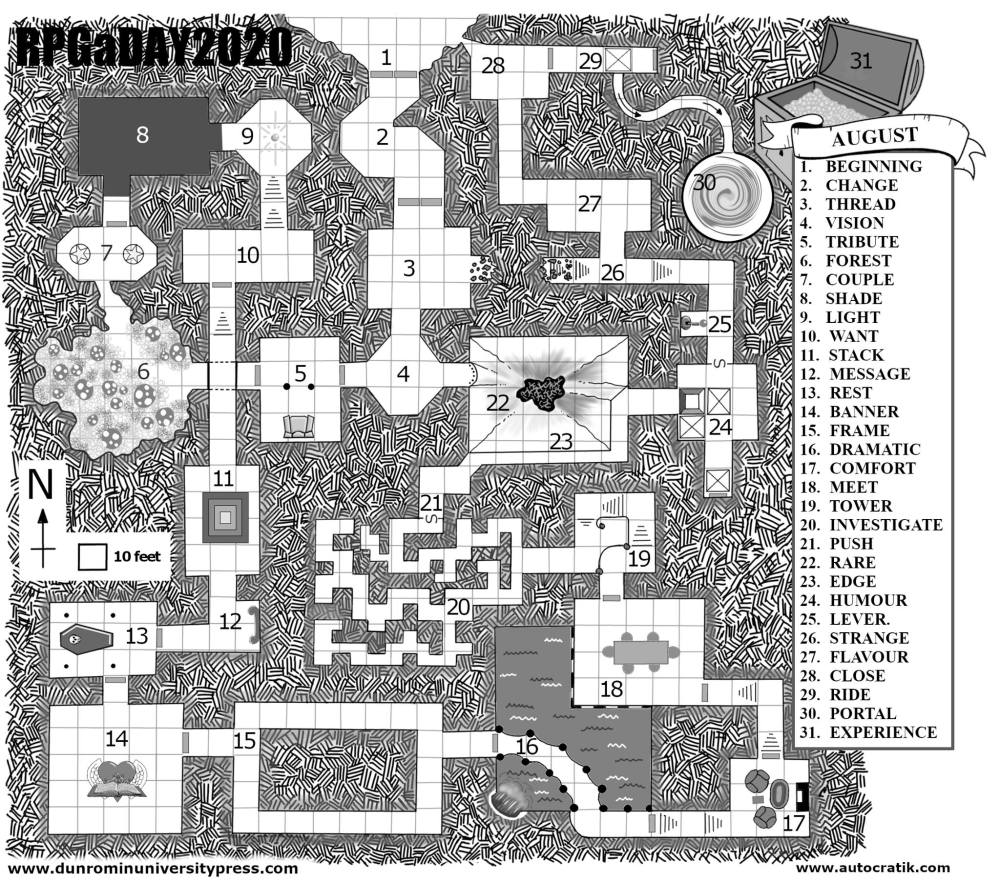 Five days into RPGaDay and I regret not treating the info graphic above as an actual dungeon and using the prompts to tell the story of a party moving through it. The idea came to me yesterday and now it’s just eating at me. A missed opportunity. Maybe next year I’ll give it a shot…

Today’s prompt is tribute. What a great word. Tribute is the act of showing gratitude, of paying homage to someone, or that thing of value or import given from one ruler to another. Buried in the word is the concept of tribe, and being a tribalist by nature, this means a lot to me.

If you examine this website’s menu you’ll find a page titled Valhalla. Valhalla is where we pay tribute to those friends who are no longer with us. Each slung dice side by side with us, and each are well and truly missed. Every damn one of them left this world far too soon.

By paying tribute to the fallen, we keep their spirits with us. We toast to their memory and tell stories of their time with us so that those who come after can feel the warmth of that fellowship and keep the fire alive.

David Farr left us when he was just 17. I still have two miniatures that he painted sitting on a shelf in our war room. He was an excitable player, full of pent up energy. He was a smart kid and I smile whenever I think of him. The character I remember him playing most vividly was a thief named H’tabbas who died beneath a falling boulder trap in the AD&D Module, The Lost City.

Jack Hill died suddenly and unexpectedly at the age of 52. We worked together in a nightclub and became fast friends for more than 20 years. He had asked me to DM for him and his wife and some of their friends. What was meant to be a one-off game became a campaign that lasted a couple of years. He was a good guy and I miss him. His most memorable character was Dunathorn the Wizard in my homebrewed Enochia Campaign Setting.

One of my best friends on this planet, Brent Smith passed at the age of 48. My last memory of him came after we’d wrapped up another exciting game night. We hugged and said we loved each other and made plans to get together mid-week. He passed three days later. He had many memorable characters over the 35 years we played D&D together. His last was Delarius the Wizard, who sacrificed himself to save the party but continued on as a ghost companion, still to this day.

John Hall was a tremendous musician and towering intellect; a guy we all looked up to. He passed two days before his 54th birthday. When I think of John I think of playing rpgs and war games in the smoke filled den of iniquity that occupied Dedman’s Trailer Park. He too had many memorable characters, but his last with us was Sir Burleigh, a knight of Caliburn on the island continent of Drakkarsys.

I think of each and every one of them often and, in my campaigns, I try to inject them into our adventures in various ways, as an act of paying tribute to their memories, to remind us all that they are still with us and a part of this game we so dearly love.