SESSION 28
Dead is as Dead does

Aldrman Grandstaff grimly explained the direness of the situation that continued to unfold in Wolfgrave Park, the prominent cemetery that occupied the center of Clell Duko. The rumors were true. The dead walked the grounds at night and the Bordermen of Boneyard’s Rest, despite constant vigil and combat had failed to thwart their activities.

Their last hope came in the form of a communicade from a seer within the Order who divined that six men, all who took the Bordermen oath would “die” and enter the catacombs beneath the cemetery and root out the source of the dead’s rising.

The plan was to have the six feign death through alchemical means, rising up within the great tomb and to ferret out the root of evil in Wolfgrave. The reward was special knowledge conveyed from the sacred Bordermen annals, 1000g in gems each, and a compliment of 100 Bordermen to add to their bannered retinue.

Accepting the offer, they ingested the potion and the semblance of death overcame them. They were placed in coffins and entombed after a brief ceremony in the mausoleum known as the Tomb of the Unforgotten.

There, upon awakening, they found themselves trapped inside the funerary drawers of the tomb, but keeping their wits about them, managed to escape the confines and descend into the darkened crypt below. 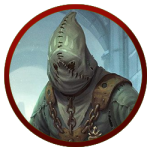 In the midst of the stench of rotting corpses, Byron, Killian, and Edmund stumbled upon a small group of hooded men, acolytes of some sort. They fought them, finding them of little challenge, until they continued to rise from death’s door to attack them anew, as if in newly fresh and energetic bodies.

Meanwhile, Arthur, Gray, and Kilraven investigated one of the burial chambers. Here Arthur found a mirror that magically displayed the contents of a room lit by green flame.

Byron, Killian, and Edmund fought their way back to the burial chamber as more undead rose up, bursting from the coffins.

Falling back, the party retreated into a secret room that Gray and Kilraven had discovered, sealing themselves inside. Descending a spiral stair, the found themselves in the chamber that Arthur had espied in the mirror.

Between two braziers alight with green flame was a circle inscribed with magical writing, ancient Enochian script from which Mortainne’s tongue descended. Killian looked ill at ease when suddenly smoke arose from the center of the circle and a man dressed in the finery of court stood before them, reddish hair pulled back tight. His darker facial hair was cut in a nobleman’s pointed goatee and stylish mustaches.

Killian replied, “Where the hell are we?”