Eager to find their two missing compatriots, the company followed the blood trail, and the cries of the dying goblin, south, returning to the manuscript room and discovering the floors alight with some form of fueled phosphorescence. The bloodtrail split, with one path leading toward the aquarium and the other toward Wilborn the Hunter’s bedchamber.

Brukhart entered the aquarium, finding the door spiked shut from the other side. He then went to the door to the bedchamber and, finding it unlocked, entered as his compatriots took up positions behind him.

Inside was the dead goblin, with two Blackmoor Men-at-Arms standing over him. One ordered Brukhart to disarm and stand down to be taken to their commander, while the other spoke through the secret door to unseen allies, warning that company had arrived. 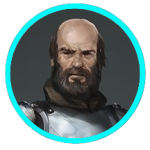 A voice called out, “Run! Run if you can!” It was Sir Jon Foster. Brukhart closed the door and Magnar called for Kik-Dos to spike it.

Meanwhile, they had encouraged Sebastian to examine the spiked door leading out of the aquarium and into the grand lounge. With a wedge, he tapped out the spike and burst into the room — discovering Gnarwald bound and tortured on the burnt bench, surrounded by Blackmoors under command of Lord Ragan Blackmoor, a light cavalry officer that had taken part in the siege of the Keep on the Borderlands overhead. 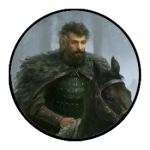 Sebastian, still nursing wounds from numerous encounters, challenged Ragan to a duel, but Blackmoor ordered his Men-at-Arms to take the “fish” and hold him. They pressed Sebastian against the wall as Lord Ragan placed a well aimed arrow into the Cassandra’s Captain. He sank to the ground unconscious.

Hearing the commotion, Sebastian’s companions rushed to his aid. Kik-Dos and Magnar kept them off guard with well-timed magics, and Brukhart entered the fray, eager to deal heavy damage against the armor clad warriors, killing one of Sebastian’s captors before moving on to face the Blackmoor in full plate.

Ragan escaped through the burnt out library as Magnar roused Gnarwald from his distress. The old priest remained stable long enough to heal Sebastian and Kik-Dos using summoning magic before slipping once more into unconsciousness.

Back on his feet, Sebastian slayed his other captor, then, seeing Brukhart heavily wounded, slipped in to deliver the killing blow on the Blackmoor knight.

Pursuing Lord Ragan, they passed through the trapped gauntlet to find Blackmoor engaged with a halfling thief. He felled the diminutive burglar then fled, racing for the Treskeggmal Chamber with Sebastian hot on his heels.

Brukhart called for them to prepare for a long rest and began barricading themselves into the crypt room while Magnar tended to the fallen halfling.

Sebastian caught up with Lord Ragan at the trapped crevice at the entrance to the Treskeggmal Chamber. He was hanging by his fingertips, desperately trying to pull himself up, but the preternatural vacuum would not allow him to gain purchase.

“Help me,” he begged, but Sebastian merely drew his blade and replied, “I don’t think so, horse.” He stabbed the Lord in the back and he plunged into darkness.

Returning to the crypt, Kik-Dos asked what happened and Sebastian replied that he didn’t know, that he couldn’t find him.

With a long rest under their belts, they chatted with the talkative halfling, Ozmund Sweetleaf, as they broke fast and prepared to venture out once more into the underbelly, unsure of what their next actions should be, when up ahead they caught sight of three Blackmoors examining the secret ladderwell into the further depths of the keep.

They looked to one another? Things just got even more complicated…