The party caught its breath, taking a short rest inside a discovered bedchamber. Feeling antsy, they all began to poke around a bit. Kik-Dos discovered a push knife hidden in the headboard that Brukhart identified as a blade crafted by Balthazar of Thorne, one of the heroes of the Battle of Blackmire. Under the bed were several scrolls, including twenty year old maps of the region, some writ with arcane magics, and a curious inventory of strange weapons aligned with the mysterious black powder they had discovered. 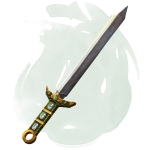 Sebastian crowbarred his way into a treasure chest, pocketing some gems and passing along a jeweled dagger to Gnarwald and some sort of spellbook to his shipmate, while Magnar discovered a spyhole into the room to the south where he could make out an aquarium filled with dark, murky water.

Everyone made their way out of the bedchamber, eager to press on.

Brukhart and Sebastian entered the next room after the Cassandra’s Captain verified there were no traps. As they made their way through the room, a serpent rose up out of the tank. Brukhart cut the thing in half, but it grew a new head and tail, becoming two snakes instead of one. Kik-Dos and Magnar held each magically and Brukhart tossed them into a bag, hoping they might come in use somewhere down the road.

Moving south into the next room, they found an instruction manual regarding the black powder weapons that Kik-Dos squirreled away. Another door led east and into another bedchamber. In a desk, Magnar found a pouch full of arrowheads, an eagle feather, and a ring with three keys attached.

Sir Jon Foster, searching under the bed came away with a bow and quiver of arrows with magical writing engraved in the leather. Kik-Dos translated this as Willborn, another hero of the Battle of Blackmire.

Magnar discovered a secret door in the south wall that led into a rat infested alcove. Fighting their way past, the encountered a giant rat, the size of a pony, in the outside hall. With a concerted effort, the party killed the beast quickly, though Sebastian was injured in the ordeal.

Pressing on, Brukhart moved into an older section of the subterranean labyrinth, easily predating the rest of the structure and the castle above by centuries of more, possibly even pre-cataclysmic. The rooms were littered with broken weapons and ruined art and furniture, and skeletal remains were scattered everywhere.

Sebastian had continued on in the main chamber, making his way west and discovering a secret door that led north. The party called him back and he joined them in exploring the ancient section of the structure. They found old mining equipment and a tunnel leading eastward.

Brukhart led the way, taking note of a cave up ahead. Entering cautiously, more skeletal remains were scattered about, but then a a deep, grating screech pierced the darkness, and the massive form of an owlbear lumbered from its resting place.

Retreating to the tunnel entrance, Brukhart held the space while his compatriots gathered to fend the beast off, but it came with a fury. It lashed out at the Skalgrim champion, but his armor shielded him from its attack.

Magnar and Kik-Dos’ spells were ineffective against the thing as Brukhart, Sir Jon, and Sebastian cut into the beast. The owlbear attacked again, this time its beak found purchase, rending the armor and creating a gap in his defense. Using this to its advantage, the owlbears claws tore into flesh and Brukhart fell to the ground, his lifeblood soaking into the cracked flagstone floor.

Kik-Dos lashed out with his magic, this time snaring the beast while his Captain used the opportunity to finish the monstrosity. 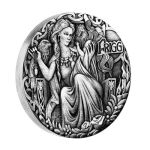 Gnarwald moved quickly to Brukhart’s side and removed a coin from his pouch, pressing it to the fallen warrior’s lips.

“He is dead,” the priest said, “but his spirit has not yet ascended. Gather his body and follow me.”

Sir Jon and Magnar lifted Brukhart’s ravaged body and carried it on the heels of the priest with Kik-Dos keeping watch over them. Sebastian gutted the owlbear, claiming its claws, beak, eyes, and heart before rejoining the others.

Gnarwald led them to a massive door within the ancient ruin and, producing a key, opened the chamber to reveal an arcane laboratory littered with potion bottles and alchemical equipment.

“Lay him there,” the priest said, pointing to a stone slab. “We may still have time to call him back, if the gods deem his time here still has worth.”

The party barred the door and hunkered down for a long rest, nursing their wounds and praying that the priest might be able to return their companion back to them from beyond the pale.