From the neighboring room of the Damar brothers, Byron Fletcher roused his compatriots, Arthur Hawkmoor and Edmund Stewart, by knocking on the adjoining wall and whispering that thieves of the Thornskull Collective were coming for the lock box and that strange robed figures were lingering about with unknown intent. A loud noise in the hall revealed one of the robed figures dead by crossbow. This spurred everyone into action as the Thornskull assassins made their play. 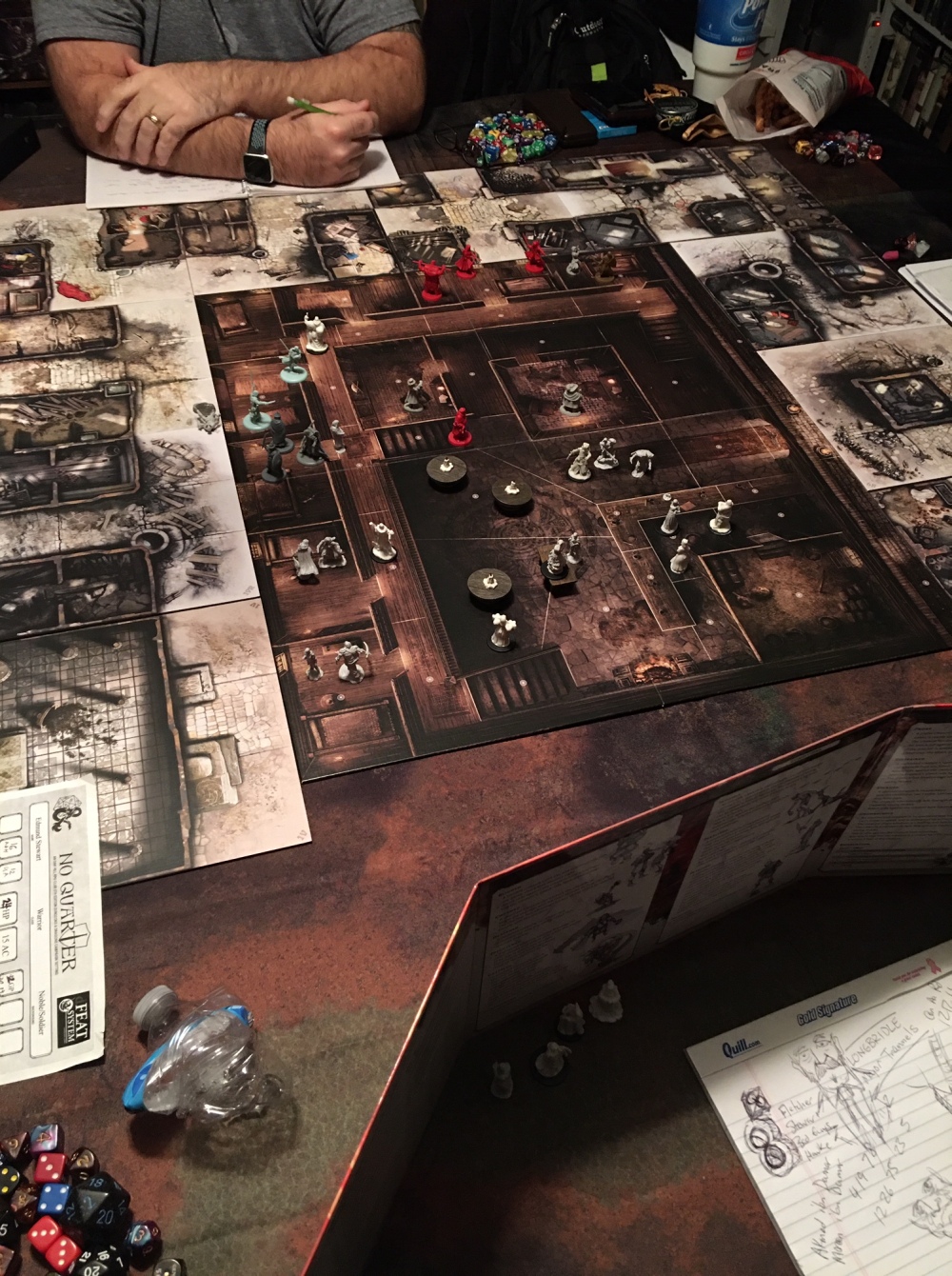 Fletcher laid down volleys of arrows to cover Hawkmoor as he made his way into the hall, investigating the room where they had witnessed strange activity earlier. Inside, he discovered a woman bound on a straw mat, but as he looked to free her, she revealed her ruse and gutted the warrior. While his constitution fought off the poison on her blade, the wound inflicted was grievous.

Stewart and Morren ibn Damar both moved into the hall as they confronted another knife wielding assassin. Morren met the figure in the hall while Stewart burst into the room, on the trail of Hawkmoor. The female assassin was on the other side of the door and was hurled back against the wall. Thinking quickly, the spearman lashed out, ripping out the woman’s throat, while Hawkmoor gathered up his crossbow and headed for their room as one of the thieves slipped into the Bordermen’s room and absconded with the lock box, leaping out the window and making his way down the alley. 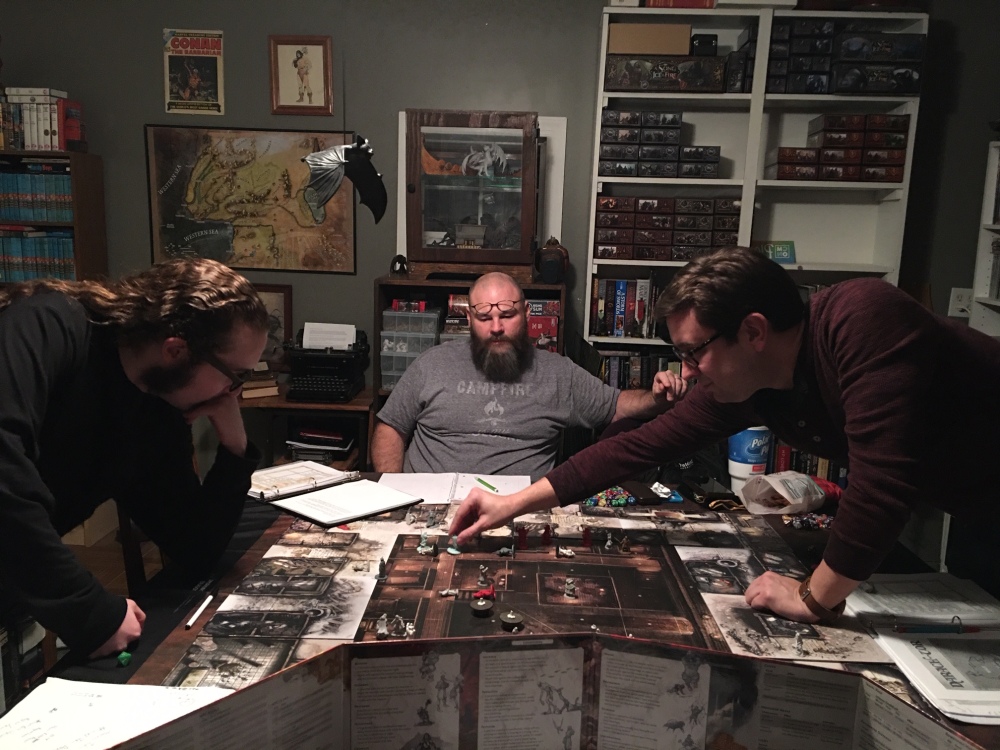 Morren fell to the thief in the hall, the victim of his accursed poisoned blade, while Fletcher raced into the next room down to try and get a shot on the lock box carrying thief. Hawkmoor positioned himself on the lower balcony, shooting at the thief who had killed Morren, injuring the rogue. Stewart struck out as well, wounding the brigand even more, but still he pressed on. As Fletcher lined up a shot on the thief in the alleyway, said thief’s ally struck with a poisoned dagger. Stewart charged the fiend and rammed his spear through the thief’s gullet as Fletcher shook off the effects of the poison enough to get the kill shot on the escaping cutthroat below. The thief fell outside of a roughshod stable, the lock box falling to the ground and spilling its contents across the cobblestone street.

Hakmet had followed after the thief, leaping from the Bordermen’s window leaving Hawkmoor alone… but not for long, as the crossbow wielding thief entered the room and took a shot at Hawkmoor, felling the warrior, who slipped into unconsciousness. Stewart followed in after, getting revenge on the crossbow assassin.

Fletcher had dropped out the window, staggering to the dead thief’s body to collect the stolen loot. Hakmet helped Fletcher back inside. They all gathered back in the Bordermen’s room where Hakmet helped heal the injured. With Hawkmoor back on his feet, the party agreed that it was time to leave Longbridle behind them and press on toward the First Lodge.

Stewart and Hawkmoor left coin for the innkeeper to cover the damage but before they could make it out the door, the tavern wench who had made a connection with Fletcher earlier begged to be allowed to join them. After a brief discussion, they agreed, and they all made for Earp Stables, where their horses were housed.

The motley group of walking wounded roused the stable boy and charged him to make haste getting their mounts ready. They admonished the lad, recognizing him as the gossip that put the Thornskull assassins on their tail. “See this as a learning opportunity,” Stewart barked, “next time — don’t get caught.”

Fletcher called his wolf Togo to his side and he mounted his newly purchased steed as Hawkmoor and Fletcher sat high in their own saddles. The tavern wench, Vera Brand, climbed up on Hakmet’s brother’s horse, with their mule in tow,  while Hakmet himself mounted his camel. The party hit the open road, headed east for the First Lodge. 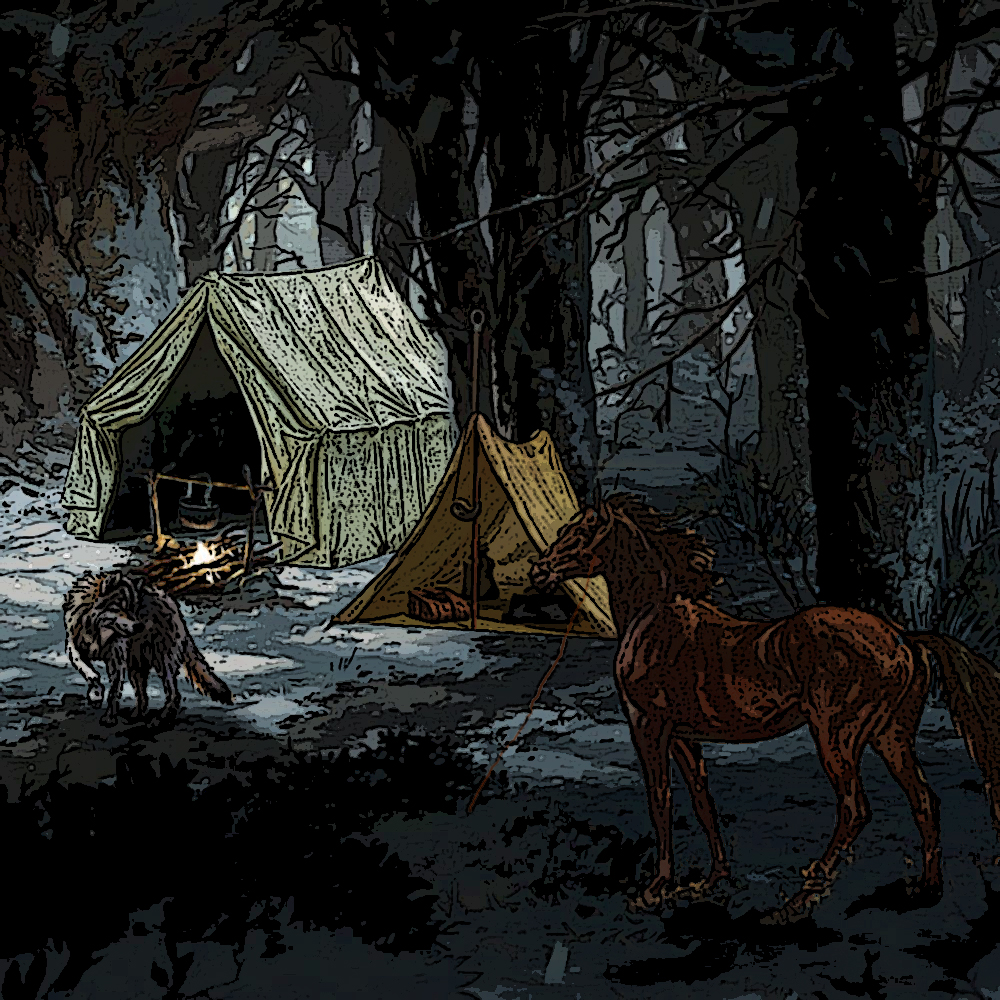 A half dozen miles down the Spine of the Dragon trail, the party set up camp, desperate for a respite, but painfully aware that every minute of rest was a precious and fleeting gift when their are thieves and assassins on your tail.