Alt-Magic Campaign
Episode XXXII
A River Runs Through It

The Hellblazers, fully recovered after their long rest, make their final preparations from inside Abraxas‘ Staff of Security. Akkamas and the wizard both called back their familiars, and Abraxas used his newly attuned staff to create a Simulacrum, duplicating himself — a wizard he renames Archon.

The party exits the extra-dimensional space only to find that Ocasta knew where they would return to the world and prepared for them a welcoming party — several orc warriors and a troll/ogre hybrid — all under the command of the wizard Aldu Khann.

The Hellblazers made short work of their awaiting adversaries. Catching them by surprise, dropping several of the orcs right away. This was helped by Abraxas’ Hypnotic Gaze which charmed several of the at the offset, but it was the wizard that was the real threat.

While Jone chased down a fleeing orc, and subsequently becoming separated from the group (more on him later), the rest of the Hellblazers concentrated on addressing the spellcaster.

Surviving a fireball cast by the necromancer, after all the orcs were dispatched, Braxton intimidated their foe and he attempted to flee. He was savaged by an all-out assault, eventually being taken captive after Abraxas put him to sleep.

Manacled by Wilbough, Abraxas wanted to cut out the necromancer’s tongue to keep him from casting spells, but Tim stepped in and called for mercy. The Hellblazers were not torturers. They gagged Khann instead and used Detect Thoughts to probe his mind as they fired questions at him.

They learned that Ocasta was on her way to Skullport as she gathered information from various points in Undermountain, all in preparation for her descent into Malhavok’s Lair.

The necromancer then used telekinesis to hurl Abraxas away and slipped out of his manacles, attempting to escape. Braxton and Tim chopped him down, ending his life.

Meanwhile, Akkamas found an elevator leading 100 feet down to a cave opening. He, Tim, and Kelwyn climbed down the shaft to discover a vast underground forest with its own ecosystem mirroring that one would find on the surface.

Amazingly, Jone approaches from the other side of a raging river, warning of “nasty women”. The rest of the party descends on the elevator and they all cross the river via Tim‘s Flying Carpet.

Discovering an ancient ring of standing stones, they are introduced to Jone‘s “nasty women” — a female drider with an entourage of spiders. Akkamas casts Ice Storm, severely hampering their movements and killing the lesser arachnids, while Kelwyn conjured a thunderstorm and reigned lightning bolts down from the heavens to devastating affect. 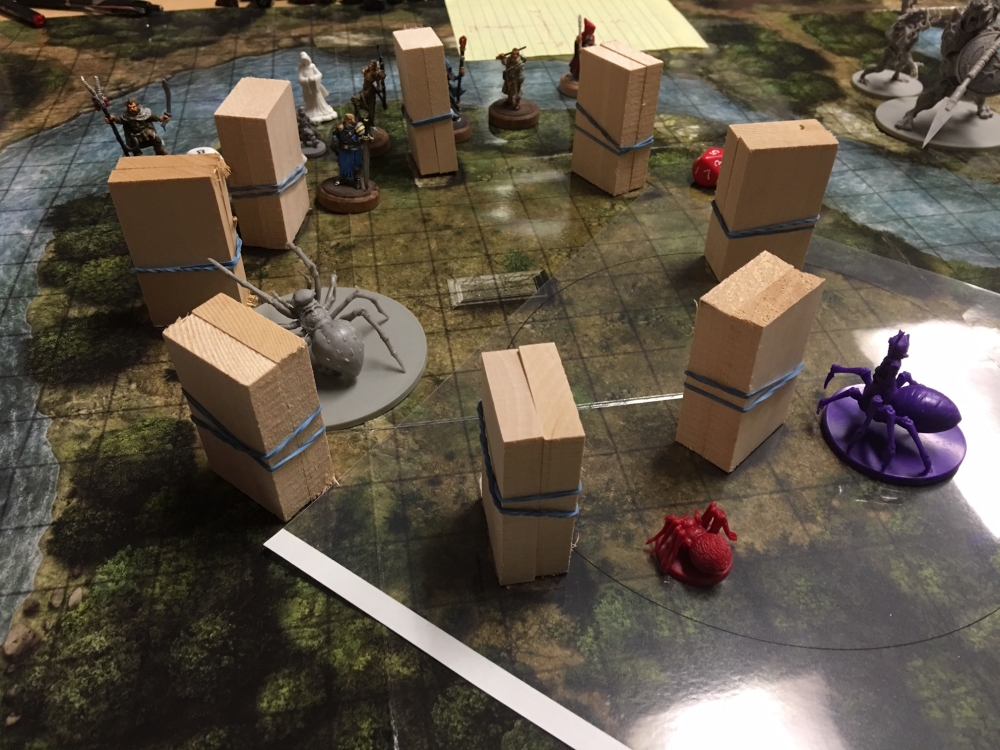 The rest of the party collaborated on finishing off their eight-legged opponents, but archers from the woods leave them concerned, as does a female hill giant upriver. Abraxas conjures a demon to harry the giant and then the Hellblazers turned their attentions to bowmen…

And thus another chapter in the Hellblazers’ adventures came to a close… Who are the unseen snipers? Will they be able to catch up to Ocasta in Skullport? They’ll find this out and more next Thursday, if we all don’t freeze to death first.