Long ago, there lived a mortal man of great power. He was respected and feared, he was wise and honored, and he stood at the ultimate peak of wizardly might.

Halather Blackcloak was born in the realm that is now Vispania, where he achieved mastery of magic at a young age. Halather quickly rose in the magical ranks, gaining a legion of pupils, all eager to learn. He and his students were famous for their collecting of secrets, always seeking more and more knowledge. It was this thirst that led Halather to Fort Waterdeep.

In Waterdeep, Halather created his stone tower from which he studied the strange magic in the area. Plunging into the deep ruins beneath Mount Waterdeep, a dungeon complex colloquially called, ‘Undermountain’, Halather discovered sorceries beyond his wildest dreams. 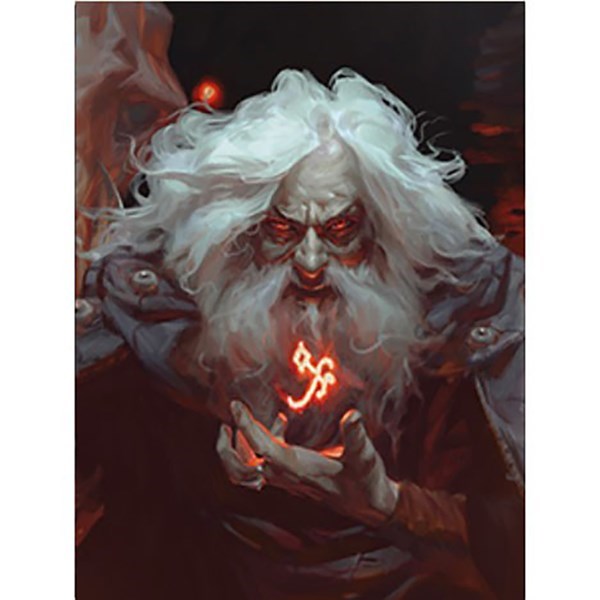 Halather discovered a tear in the fabric of magic itself, such a tear that warped all reality around it. He soon became obsessed with Undermountain, traveling deeper and deeper, searching for something he would never find. Halather became as we know him today, mad.

The Mad Mage began styling himself as Halaster Blackcloak, master of Undermountain. He became so very warped by the arcane energies within the dungeon that he and the ruins became one. Halaster would defend Undermountain with his life, but preferably with the lives of others. A favorite method of his was to capture creatures from the nearby wilderness and set them loose in Undermountain, pitting them against each other in a perverse war for his amusement and the defense of his sanctum. If an adventuring party were not slain by the tricks and traps, surely the orcs and giants would finish the job.

Halaster had become so intertwined with Undermountain that the entire ruin became a sort of phylactery. As long as the tear in the eldritch tapestry remains, so does Halaster. The few adventurers that have survived the dungeon have reported conflicting information regarding Undermountain, such as passages and corridors that would lengthen or shorten, or entirely new rooms that would appear out of thin air. All obviously encounters generated by the warped will of the Mad Mage.

There are two legendary figures who have seen the horrors of Undermountain, and survived the nightmare of Halaster Blackcloak, standing as perhaps the most famous people in Waterdeep. Of course, I speak of Durnan of the Yawning Portal and Mirt the Moneylender.

Durnan is the proprietor Waterdeep’s Yawning Portal Inn, one of the wealthiest businesses in the City of Splendors. He has the good fortune of being one of the oldest humans alive, with some saying it was through ancient sorceries plundered from Undermountain’s depths.  Adventurers seeking wealth and glory in the dread ruin are known to pay good money for Durnan to lower them into the Yawning Portal for which the Inn was named. Thus he has maintained his more than comfortable livelihood in the city, rivaled in wealth by few.

One such dignitary is Mirt the Moneylender who despite his considerable wealth is said to be a simple man, never wasting time on things he didn’t care for, and always living life to the fullest. Though he would never admit it, he is believed by most to be a secret Lord of Waterdeep. His personality is something hard to hide, even among masks and cloaks.

Halaster Blackcloak has had a far reaching influence on Albatheos, able to shape many a life with his foul invocations. It is rumored that Durnan was corrupted by Halaster, now unable to leave the Yawning Portal even if he wanted to. All on the continent have perhaps been affected by the Mad Mage of Undermountain in some way, as his gaze is long and far, and his power, perhaps limitless.

Ah to explore that dungeon, I would give a kingdom. But alas, I would not give love, and Anna has forbidden me to travel to Waterdeep. A shame, but I am content here, with her and the Vistani. To think that the Mad Mage lives such a life, one without love. I pity the wretch, I truly do.

My previous comment stands, though I understand it even greater now than ever before. A life where love has been stolen from you is a kind of Abyss beyond any that mortals could fathom…