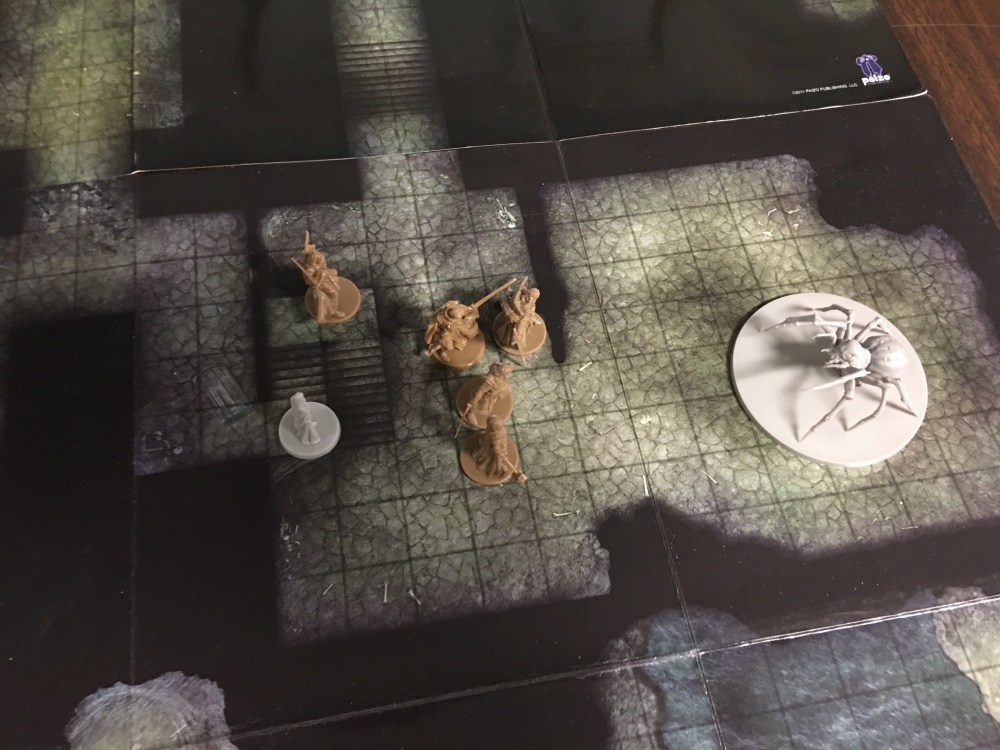 Our “No Quarter” Playtest continues. Here’s a brief summary of what happened in our past two sessions:

After a harrowing battle with Mercer forces inside Blackmoor Keep, the party was torn. They had uncovered some intriguing artifacts from the ruin, and even more intriguing intelligence.

It seems the Mercers were launching a campaign against the Stewarts, and they had chosen this ruin as their base camp because “something” lie beneath it. And they aimed to find it.  However, with sinister forces from the northern kingdom of Mortainne seemingly allied with the Mercers, the surviving militia-men had to make a decision.

Thus, our intrepid party was met this dilemma head-on. They knew they needed to warn the Hawkmoors away from Blackmoor Pass and to Highmoor Castle instead. But they also were drawn to venture into the underbelly of Blackmoor Keep. They opted to send Moko the Candlemaker, a seasoned veteran of past military operations into the mountains to signal the Hawkmoors, while the rest, along with their new ally, Shaerohn, would delve into the depths of the ruined fortress.

Things quickly went south for Balthazar, Garrick, Wilborn, and Yendor, however. Encountering a band of Mortainne half-orcs, the party, save for Shae who escaped into the darkness, were captured and delivered to the black wizard Shadrak Delacourt, who conjured an illusory giant serpent to strike fear in their hearts.

For three days they were imprisoned, along with three other survivors from the Blackmoor Pass engagement. Two died, while the superstitious Elam droned on like a crier of doom. Meanwhile, Wilborn the Hunter, using the time to study the books they’d uncovered in the ruins above, learned the ways of magic and was able to light the darkness.

Soon after, Moko returned, coming to their rescue, thanks to Shaerohn’s efforts, and the party fought their way free, only to stumble into the midst of Shadrak and Captain Hollingford Mercer. Quick thinking had Moko assume the role of the traitorous Liam Hawkmoor alongside the party who assumed their roles as his band of brigands.

The ruse purchased, the party traveled south, deeper into the underbelly, fighting their way past a giant spider, where they discovered ancient corpses of supposedly mythological dwarven warriors and two Bordermen, one an elf, which was even more surprising.

Their journey led them next to a feral lion, malnourished and crazed, whom they dispatched easily enough. Then, after ascending a cliff to head even further into the cave complex they were amazed to find a magical fountain from which sprang a frost-naga.

Mighty blows rained down from the party, and the naga was defeated. Out of breath and exhausted, the party guarded themselves in the enchanted chamber, to find a few moments of solace before venturing forward…