Oak Hill RPG Club hosted a public Dungeons & Dragons event last night at the Eastern Woodland Carvers Club Building. While there was not a huge turn-out, we did get to introduce two new players to the game and we’re hopeful that word will spread and these events will continue to grow and attract even more men and women to the hobby.

These sorts of things take time, but we were more than pleased with the night’s outcome.

We spent the first hour rolling characters and discussing the nuances of game play and rules, and then we were off, into the thick of it.

Our players assumed the roles of merchants and craftsmen from three neighboring villages, conscripted by House Stewart to defend Blackmire Pass from invading Mercer forces until the military could arrive.

Under the command of fourteen year old, Allenford Stewart, our militia was ill-fated from the start.

Here were our night’s diceslingers:

Willborn, a hunter from Galensfort (Steve), Moko, a candlemaker from Roland (Shaun), and Garrick, a weaver from Thorne (Connor) were our seasoned roleplayers. They were joined by Yendor, a stonemason from Roland (Rodney) and Balthazar, a blacksmith from Thorne (Chris).

There were also two NPCs among their number, Fnord and Grimes.

This is how the action began:

Sweat stings your eyes like angry wasps, dripping down like venomous rivers cutting a wake across your gore splattered face.

All around is naught but a whirlwind of chaos and brutality, a blur of dull colors in kinetic frenzy.

You are parched, gasping and panting as you breathe in the dust choked air, the bitterness of iron and copper on your tongue.

Deafened, your pounding heart thunders in your ears, drumming a ferocious beat inside your helm.

Yet still you are chilled by the cries of men, the screams of dying mounts, and the cacophonous rhythm of steel striking steel.

You push away the pain from a dozen wounds, everything drowned out by the incessant call for retreat from House Stewart’s hornblower.

Cut off from your host’s withdrawal by a clash of plate armoured warriors on the scarlet drenched plain, you stagger west into the tenebrous muck of rancid peat.

Above the wafting scent of sweat, blood, and the acidic smell of all consuming fear, was the rising stench of the moor that you and far too few of your comrades-in-arms have plunged into.

Harried by the field’s victors, your desperate desire to survive this day’s butchery drives you past exhaustion until the howl of battle becomes muffled by the splash of heavy legs through the fetid waters of Blackmire Swamp.

“Bloody hell,” Fnord croaks, “that damnable prince has seen the lot of us murdered.”

“Curse the Earl for giving command over to his wee bairn. Forcing us to follow a boy into a battle such as this, we were mad to do so, but no less mad than he who ordered it.”

“Hush,” Grimes whispers harshly. “Listen.” Quiet falls as you all hold your ground.

Looking about you see the marsh littered with the dead, Hawkmoors’ Stewarts and Borderland Mercers alike.

But you also see dark shapes and hear their near silent approach. Mercer hunters and reavers, looking to silence the dying and plunder their corpses.

Take dice in hand and let us roll for initiative.

What followed was a harrowing battle with Mercer Halberdiers and Archers. While the intrepid band of conscripted militiamen fought for their lives, and Balthazar took a rather nasty arrow to the right arm, Fnord and Grimes went about looting the dead.

A mystical encounter with an ages old wisewoman name Hagatha saw to their wounds being healed and she set them upon the next leg of their quest. 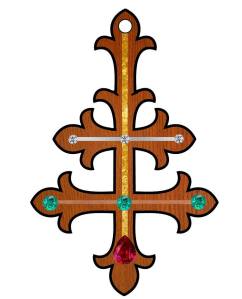 First, to discover a secret among the dead: A disguised shield among the Mercer fallen revealed the body was actually that of Sir Tobin Hawkmoor, heir to the Duchy of Hawkmoor. Also among his items, looted by Fnord and Grimes, was a Dreigotter Cross, the symbol of the Southerland Gods Sonne, Erde, and Nachkomme, worshiped by knights of Drakorum and Kalibyrne, hated enemies of our heroes’ homeland Darach-Tor.

Second, to seek out more clues within the ruins of Castle Blackmire. This led to our adventurers confronting Captain Daerk Mercer, defeating him in a bloody conflict on the threshold of a lover’s hideaway.

This introduced the party to the lovely and dangerous Shaerohn, a camp follower with an ear for gossip and intimate knowledge of many of the higher ranking officers in the Mercer encampment.

And thus our tale ended for the night. We had intended a one-shot adventure, but the story grew in the telling. If you’d like to be a part of the tale, join us on Saturday, February 10th from 5-9pm as the story continues and high adventure awaits.